The Duke of Cambridge has promoted British business and met Paddington bear as he continued his tour of China.

The prince toured business exhibition the Great Festival of Creativity in Shanghai, calling it a platform for Britain’s “thriving creative sectors”.

He attended the China film premiere of Paddington and met the famous bear on the red carpet.

The prince also watched schoolchildren in a football session with coaches trained by England’s Premier League. 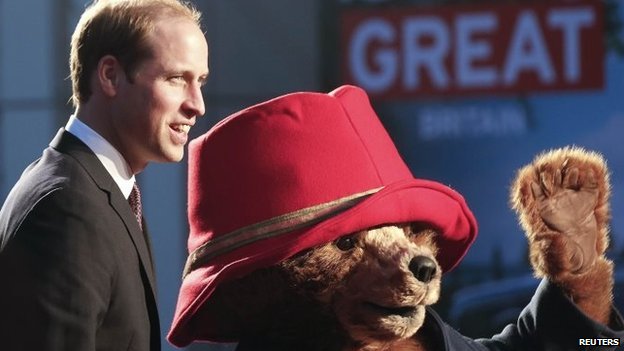 The duke, who is an avid Aston Villa fan and president of the Football Association, saw the pupils being put through their paces when he visited Nanyang High School in Shanghai.

Football is about to become part of the national curriculum in China, and the British Council runs a scheme called Premier Skills which trains coaches and referees

The duke was shown around by Paul Hughes, 33, a former coach at Reading, Millwall and Southampton football clubs, who travels the world with the British Council scheme.

“The duke told the children that if they keep on working hard hopefully one day they might play in the Premier League,” he said.

“He asked them if they knew who David Beckham was, and said that if they got involved in football then one day they might meet him.”

The duke had been expected to take part in a five-a-side game, but only kicked one ball during the visit.

During the second full day of his China tour, the prince also attended the British Council Global Alumni Awards, where he met Chinese graduates who had studied in the UK.

Before giving a short speech, the duke met the nine Chinese finalists who told him being educated in the UK had made a huge difference to their lives.

When one of the former students said he had studied law and was now a judge in Shanghai, William joked: “I’ll make sure I’m on my best behaviour while I’m here.”

He visited the Shanghai Film Museum before the premiere of the Paddington film.

Organisations represented at the three-day Great Festival of Creativity include British Airways, Jaguar Land Rover and the BBC.

Opening the festival on Monday night, the prince said: “It is a platform not only for our famed and still thriving creative sectors, such as film, art and media.

“But it is also a platform for the creativity and inventiveness that British firms apply in a wide variety of sectors, like healthcare and education.”

The final stop of his China tour will be Yunnan province, where he will visit an elephant sanctuary and nature reserve.

The prince is on a tour of China and Japan to promote UK relations and business partnerships with both countries.

The Duchess of Cambridge is not with Prince William because she is due to give birth to their second child in April.